Fishing has been more challenging in the mornings tempted by the usual popular lures, white minky, Montana, green Fritz , blue flash damsel, whereas in the afternoon they have taken very aggressively off the top of the water with dry flies, including  klinkhammers, hoppers, Griffiths gnat and  grey wolf.
On catch and release this week and catching their bag limits were: Mick Jameson, David Williams, Carl Wilson, Nigel Salter, John Price , Jason  Palmer and Andrew Williams.
On catch and kill tickets were John Howell 4, Hugo Price 2, Andrew Millins 5, Carl Williams, Mick Smith 5, Tony Pritchard 3, Terry Hall 5, Andy Rawlings 3, John Lyall 3, C. Lyall 2,  Dave Reaney 1.
A Great fishing day for  Graham Challenger who landed 6 for a bag weight of 19lb 8oz and Ron Sutton  who took 4 weighing 9lb 4oz in total.
Wilbur Leoviriyakit  caught a lovely 3lb 8oz Rainbow on a yellow blob from the gin pool, then went on to catch  his bag limit of 10 fish
A nice catch For Phil Rees, who caught His first fish of the day on an olive damsel, Graham  Jeremiah caught 5  but lost 2, Using a squirmy wormy and a black gnat. Steve Evans caught his  6lb 8oz Rainbow on a cats whisker, which we have entered into The Troutmasters Competition. We are open every day from 7.30 a.m 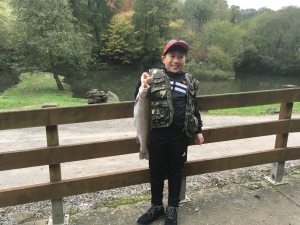