Temperatures this week have ranged between 9° and 21° with our waters remaining cool and clear
It was Nice to welcome back this week after their winter break, our lovely Hook Line and Sinker fishing for disabled club, Roderick Kirton who caught 2 and Graham Cooper also caught 2, were here with their carers , an hour and half of fishing then in for lunch and back out fishing again.
Marco Siebeneichler all the way from Brazil, came to try his hand at fly fishing with regular Keith Fenton, and caught his first fish on a bloodworm, So too did Keith’s grandson Archie Harrison, who also caught his first fish on a bloodworm, good tutoring Keith.
A very Nice 4lb Rainbow was caught By Garry Edwards, on a hot head damsel on his
Catch kill and release ticket , Garry went on to release   8,    Also on catch ,kill and release were, T. Richards, A. Roberts, B.Taylor, I. Evans, D. Macintosh,Cori Hawke , Chris Williams . On catch and kill tickets were Pete Hughes 2, Peter Morgan 1,Richard Morgan 3, Alan Brunt 2, F. Price 4, Marco Siebeneichler 1, Archie Harrison 2, Rob Britten 3, Glyn Morgan 2, Harry Webb 2, Hugo Perks 2, David Griffiths 5, Gerald Mitchell’s 4, Glyn Edwards 6, Eric Jeffries 4 including 1 Tiger trout which was released successfully. Heaviest fish caught this week by Adam Jones weighed in at 8lb 3oz and was taken on an orange fritz and entered into Troutmasters competition.
On Catch and release this week were, John Burton, George Dickman, Tony Talbot, Adam Price-Hunt, Ashley Clarson, Hanna Buys, Kevin Wakefield,Lee Wakefield, Mick Smith, Phil Roe, Alan Jeavons, Martin Lloyd , Ethan Clarke, Colin Gooch.
Popular flies this week have been blue damsels, Alexander fly, orange fritz, bloodworm, klinkhammer, gold ribbed hares ear, buzzers , green spiders and egg fly.
We are open every day from 7.30 am 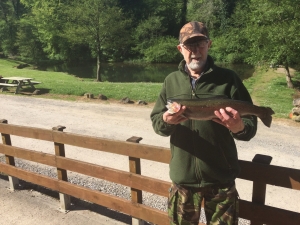 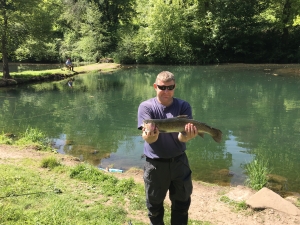