Due to the high winds and rain last weekend  just 3 Anglers came through the gates on Sunday, but we didn’t really expect any with the awful weather, George Dickman and Tony Talbot had a good fishing day despite the rain they caught 5 each on black buzzers,black crunchers and green spiders, while David Williams caught his bag limit of 10 fish on his catch and release ticket using mostly white minkies and black Montana, although there was a constant westerly wind the fish were biting well. We had our weekly stock delivered which livened up the pools with some larger rainbows and blues ranging from 2lb to 6lb. Hughie Wilson caugh 7 on catch and release on his squirmy wormy and bloodworm while Colin Gooch had his bag limit of 10 fish on a variety of buzzers,  Harry Webb caught 2 to take home from the clear gin pool on a black damsel and a bloodworm. Paul Mason caught his bag limit over the course of the day changing tactics to suit the conditions but caught mostly on his favourite fly a green spider. Nigel Thomas from Bristol brought along his friend Michael Dene for his first go at fly fishing, Michael battled on through the wind and rain to catch his first rainbow trout on a green damsel, Nigel took 2 rainbow and one blue trout from the gin pool using an olive growler fly. Father and son Richard and Peter Williams caught 7 beautiful rainbows between them on their catch and kill ticket from the gin pool and top pool  on bloodworm and green damsels.  Basil Freeman took his usual 2, Ian Cooper 1, S. Bicknell  9, Gary Whitlock caught 5 on catch and kill,  John Riggs landed 6 on chamois fly and cats whisker, Jeff Roberts took 4, Steve Moore 2,  Terry Griffiths caught 9 on catch and release using white minkies ,  blood worm and dark buzzers, Robert Hedges 3, Will Jeavons caught 3 on the gin pool and 2 on the middle lodge pool on a blue flash damsel and black and green Montana. Ethan Clark landed  2.
Rhys Evans from Newport took 3 and Alan Evans from Cwmbran took 2 after trying a variety of flies from the lower lodge pool. We are open  every day from 7.30 am 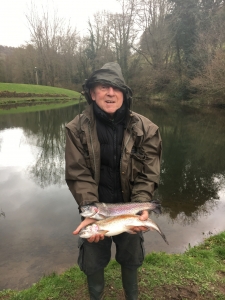