With cold winds at the start of the week, anglers were pleasantly surprised at how well the pools were fishing. The fish are still rising to the dry fly, always an exciting way to fish. For those who like fishing the float or dry fly on top with a dropper, Egg flies, Buzzers, Diawl Bachs etc were tempting fish. For those of you who like to pull the lure, Damsels Montanas, Spiders, Chamois and Squirmy Wormies and Apps’ Bloodworm fished either fast, slow or static have been successful.

Fish have been taking a variety of small flies all week including Crunchers, Black Gnats, Buzzers, dark Egg flies and Diawl Bachs. Adam Price Hunt landed 8 fish on catch and release including a 4lb 8oz rainbow which we have entered into Troutmasters.

Zach Williams, aged 12, is new to fly-fishing and on his second trip to Bigwell caught and landed 2 beautiful rainbows. 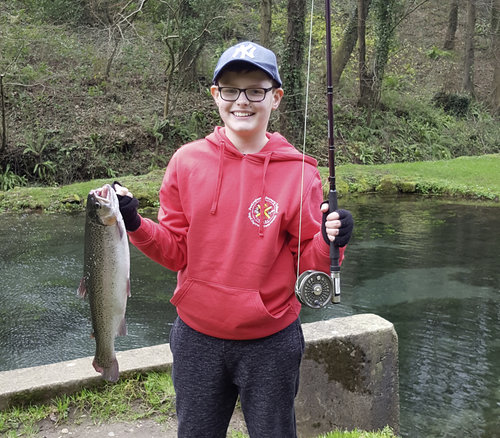 Zach Williams had a successful day at Bigwell fishery.