A very cold week and some snow meant a quieter week with fewer Anglers through the gates, but for those that ventured out there was much success as the fish were eager to take a variety of flies presented to them

Steve Gray only fished on blood worms and landed 8. Hughie Wilson caught 7 Rainbows plus 1 Blue trout on catch and release mostly using crunchers and small black buzzers having success with his very slow retrieve allowing plenty of time for the flies to fish ‘on the drop’

Adam Price-Hunt caught his bag limit of ten fish on catch and release at the weekend including a 5lb Rainbow from the lower lodge pool with a floating line, 4lb leader and using a klinkhammer fly, then released successfully, which we have entered into Troutmasters competition for Adam. Dylan Daniels, Danny Pearce and Paul Legge all caught their bag limits of 10 fish on catch and release. Colin Gooch landed 7, Harry Webb 2, Basil Freeman 2. Fishing on the lure using his home tied snake patterns Graham Evans landed 6 fish using a figure-of-eight retrieve from across all pools 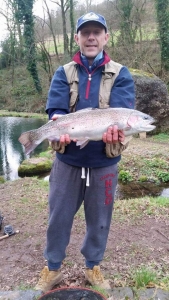