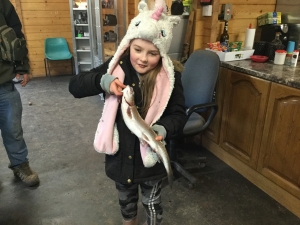 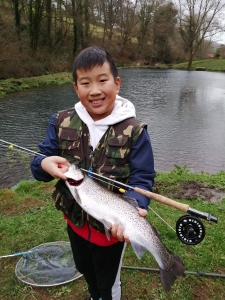 A mixed week weather wise at bigwell, staying a lot drier but with cold biting winds which for the earlier part of the week kept the fish down and challenging to catch, and our anglers were kept on their toes trying to find the right fly to temp them.

John Burton caught his 10 fish limit on catch and release including a nice 4lb Rainbow taken on an eggstasy egg fly. Paul Elsworthy caught 9 mostly on small buzzers, Will Friston  landed 4 from the gin pool,Keith Fenton 3. Mark Addison from Pontypridd landed 6 on egg flies and blue flash damsels including a 5lb 7oz blue trout from the gin pool.
Catching well were  G. Power, M. Griffiths, A. Mercer brought along by regular Danny Fallon on their first trip to Bigwell , Hugo Perks 3, Colin Williams 2, Rhys Morgan 2, Peter Baylis from Bristol landed 3 from the gin pool and 2 from the lower lodge pool including a Tiger trout which he landed using a gold head daddy on a floating line and 4lb leader.
Jason Williams and Max Williams had their  bag limit From across all pools,Phil Rees 4, Phil Roe 2, David Jones 5, Helen Birchall 3, Simon Jeavons 2, Colin Gooch 5 using his favourite white minky fly.  Harry Webb 2, Alex Macey  on his catch kill and release ticket caught 2 on catch and kill and went on to release 6 from across all pools , Alex mostly used his favourite fly a hot head UV buzzer.
its been a good week for our younger generation anglers ,Ben Andrews brought his daughter Lilly Aged 8 who caught a Rainbow trout from the top pool, we also had Young Wilbur Leoviriyakit here fishing with his dad Kasidit, Wilbur landed a 2lb 8oz  Rainbow from the top pool .
Popular flies this week have been blue flash damsels, blood worm, small black buzzers, white minky, egg flies, and pheasant tail nymph.
We are open every day from 7.30 am