Good weather this week at Bigwell with temperatures averaging 11 degrees and the pools cool and clear, the fishing has been exceptional with quite a few of our catch and release Anglers all catching their bag of 10 fish and our catch and kill Anglers all taking their required fish.
What a great weekend for the younger generation which began with Young Alex Cotterill age 8 here with his grandad Gary Tucker, with his first ever fish taken on a squirmy wormie and entered into Junior Troutmasters . Lewis Thomas also caught 2 rainbow which he took on bloodworm, Lewis also here with his grandad Dai Thomas.  5 year old Edward Collier-Webb seen in photo with mom Sharon with his first catch, taken on a damsel fly under a sight indicator 2’ down and slow retrieve, we have also entered Edward into the junior Troutmasters competition.
Our more senior Anglers were also having a great week here at Bigwell with John Burton catching his bag limit on catch and release, his most popular fly was a white egg fly with a green spot. Jason Williams also caught his bag limit on catch and release. Also on catch and release were Keith Fenton, Bob Calder, John Burton, D Thomas,Gary Tucker,Adam Price-Hunt, Ashley clarion, Llwyd Johnson, Brent Johnson, Mike batty, Lloyd Isgrove, Lyndon Harris, Carl Williams, Mick Smith, and Phil Roe.
On catch and kill tickets were Brent Johnson 2, Zach Williams 3, Terry hill 3, R.Mackenzie 3, A. Mackenzie 2, Mick Fahy 1, Jean Fahy 1, Gary whitlock1, George Parfitt 4, Alan brunt 2, Graham Jeremiah 2,Hugo perks 4, John Butterfield 5. Popular flies this week have been, blue flash damsels, cats whiskers, black gnats, aps bloodworm, buzzers, klinkhammer, pheasant tail nymph and egg flies. We are open every day from 7.30 am. 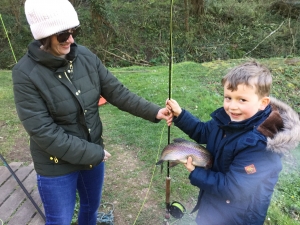