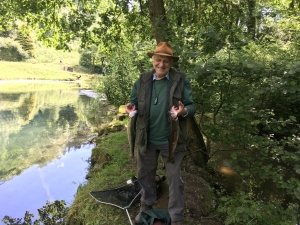 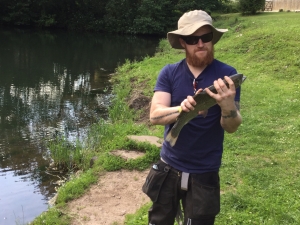 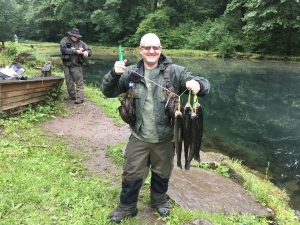 On Tuesday Steve Jones caught 4 on catch and kill, using a floating line,Steve was catching on a green spider in the heavy rain, he then caught on a hopper when the rain eased off. Colin Gooch landed 6, Harry Webb 2, Hughie Wilson 6, Gary Tucker 2,
Ron Baker from Buckingham here with his wife Ann , caught his 10 on catch and release and 2 on catch and kill, “all you need is a rod, a reel and a wife who sits knitting and Bird watching” says Ron. David Smith caught our heaviest fish of 7lb 8oz from the gin pool using a floating line, 6lb leader and using an Adams parachute fly he then went on to land 5 more from across all pools.
Gareth Hill on his first ever fly fishing trip, caught 3, well done Gareth.
John Burton  caught his bag limit of 10 . On Monday the fish were moving around very well at the middle to top of the water and could be seen chewing and spitting out flies almost as if they were playing with them but Gareth Jones proved his fishing skills by landing  5 including 1 blue and 1 Tiger trout . Popular flies this week were klinkhammer, Adams parachute fly, black gnats, aps bloodworm, blue flash damsels, cdc f fly, parachute buzzer, green spiders and hoppers. We are open every day from 7.30 am