Despite the extreme windy conditions last week our Anglers still came through the gates,  on Saturday Steve Boyle and S. Finch took 5 each on their catch and kill tickets, under very windy and wet conditions,John Lyall fished here on the same day with his sons Chris and Paul , John took 2, Chris fly fishing for the first time caught an impressive 4, and Paul took 5, catching mainly on green damsels and pheasant tail nymphs.  On Sunday George Dickman caught 5 fish and lost 4, 1 was taken on a diawl Bach suspended 18 ins down under a sight indicator the others on an orange blob and yellow buzzers. Dave Tapper landed 2, Chris Cowlson 3, Paul Sanders 3,Richard Morgan 4. Dale Llewellyn 2. Tuesday this week saw one of our best fishing days for a while with rods bending over on all pools, Harry Webb caught his second fish on a green Montana, and Hugo Perks caught a beautiful 3lb rainbow from the lower lodge pool taken on a red klinkhammer and went on to catch 3 more using his Allcocks Marvel  split cane rod that his father bought for him back in 1965 . Our Veteran Angler Basil Freeman still fishing at the grand age of 89, caught his usual 2 for the table on a green Damsel . Graham Jeremiah landed 2 on squirmy wormies and Phil Rees  landed 3 mostly on cats whiskers and chamois fly, Whilst retrieving one of his fish Phil’s leader became entangled with a previously snapped leader still attached to a fish, so he managed to land 2 fish using only one  hook.  On catch and release this week and catching their bag limit was John Burton, Richard Tremain, Keith Fenton, David Lee, Mick Foster, Dennis Millward, Ian childs Lewis Jones and Chris Williams. Popular flies this week have been klinkhammer, pheasant tail nymph, white cats whiskers, whickams fancy, black gnats, aps bloodworm, green damsel, yellow buzzers, Montana and egg flies. We open every day at 7.30 am 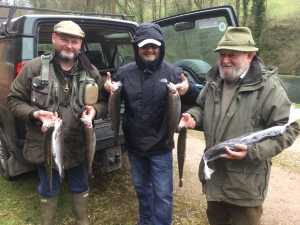 John Lyall with his sons Chris and Paul 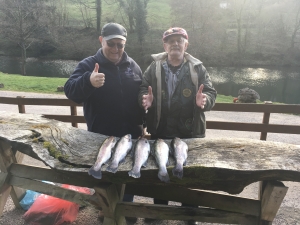