Challenging fishing this week  on all our pools, but it was lovely to see lots of  father sons, daughters and grandchildren  out fishing for the last week of the summer holidays, with Paul Williams catching his bag limit of 10 on catch and release and his grandson Luke who caught  2 from the gin pool on a black gnat,1 from middle lodge pool on blood worm and 3 from  the lower lodge pool on a green spider,Tony Walsh  fishing with his daughter  Lucy landed 10 Fish between them on their catch and release ticket including a beautiful Brown Trout which Tony caught on a deer hair sedge and released successfully. Also Catching their bag limits this week were Jason Williams, Oliver Spear, Carl Williams , John Burton, Paul Elsworthy , Steve Mogg and Keith Fenton . Dave Evans landed 5 from across all pools. Hughie Wilson caught 5 including 1 Tiger trout which he caught on a black buzzer.  Keith James took 5 on his catch and kill ticket from across all pools mostly on egg flies. Mike Harrison landed 5 on catch and kill, Neil Evans from Bristol decided stalking was the order of the day on the gin pool using a floating line with a black nymph on the point and a green diawl Bach on the dropper, and with a slow figure of 8 retrieve , successfully caught a 6lb Rainbow. Phil Mason  caught 5 from the lower lodge pool on cats whiskers and bloodworm and one off the top with a klinkhammer. Richard Stephenson took 4.  Michael Johnson caught 4 fish including a 4lb 3oz blue from the gin pool on a blue flash damsel. Pete Hughes 2, Alan Brunt 2,  Dave Shinton 4, Phil Rees 2. Popular flies this week have been, klinkhammer , black and green peacock fly, Adams dry fly, blue fritz, orange nymph, black buzzer, green spiders and egg flies.  We are open every day from 7.30 am. 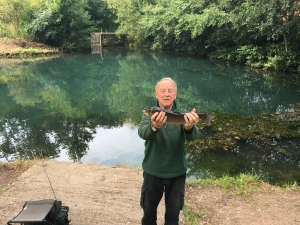 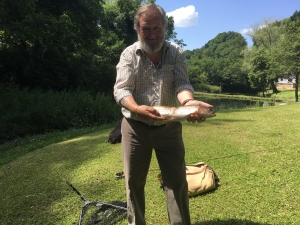