The weather this week has been varied, with some heavy rain and winds with temperatures fluctuating and some lovely sunny days, the pools have been fishing exceptionally well with a good number of fish being caught on catch and kill helping us to have a good turnover of stock.
What a great start to the morning with 5 year old Lottie Andrews catching her first ever fish, with a little help from dad Ben Andrews, we think she is following in her big sisters footsteps Lilly Andrews , who last week caught her first Rainbow.
Chris Laidlaw was seen having great sport , catching  4 from across all pools, 1 on a diawl Bach fly , 2 on a Dunkeild wet fly,and 1 on a black buzzer off the top, Chris was using his floating line and his intermediate line depending on time of day and where the fish were.
Barry Jenkins landed  6 on his catch and kill ticket,  also on catch and kill tickets were , Lionel Davies 4, Keith Thorn 2, Gary Tucker 4, Peter Morgan 2, Howard James 2, keith Fenton 9, Alan Brunt 2, Rob Britten 3, David Roberts 4, Ryan Williams 3, John Bradbury 8, Mick Saunders 4, Andy Stevenson 5, Peter Jones 3 and John Roberts 2.
On catch and release this week and catching their bag limit of 10 fish were John Burton, Paul Elsworthy, Adam Price Hunt, Richard Tremain, Robin Vale, Glyn Morgan, Jason Williams and Martin Cox. Popular flies this week have been, minkies, Montana’s, small black buzzers, green damsels, diawl Bach’s, klinkhammers 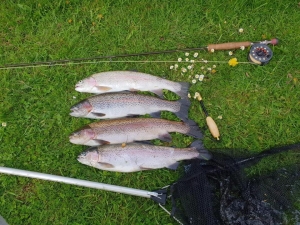 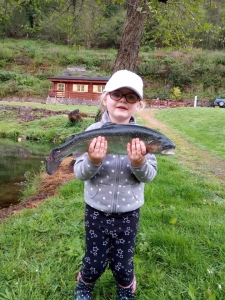