Temperatures have been between 13° and 23° this week at Bigwell with a mixture of very warm sunny days and wet and windy days and the fishing has been just as challenging. Carl Williams and Mick Smith were here from Hereford, both catching, Carl having great success using a deer hair sedge on the top with a jungle cock, about 18” down and caught several using this method.
The weekend saw some very warm weather, Gary Tucker here with grandson Alex Cotterill, Alex caught 2 and grandad 3 all on bloodworm .
On Saturday we saw some friendly competition going on when Ryan Leonard caught on a dry fly closely followed by brother Shaun Leonard, Dad Mike Leonard also landed 1  the final score was Shaun 2, Ryan 2, Mike 1, Mike had the heaviest fish beating Shaun by .4 of an ounce.
On Monday Rob Britten from Newbridge was here st 7.30 am, caught his 3 fish bagged up and gone by 9 am, Rob took all 3 fish on his size 16 pheasant tail nymph.
Basil Freeman our oldest Angler 90 years young this year, caught his 2 fish on a blue myler from the top pool and Colin Gooch caught his on a white minky from the gin pool, (see photo).
A very Nice catch by Garry Edwards  who landed a 4lb 6oz Rainbow using a Tiger cat boobi Fly fished deep and retrieved with short sharp movements. Richard Colston had a tough days fishing and decided to try his cicada fly that he bought when he was in New Zealand and finally caught his first fish of the day . On catch and release tickets catching their bag limit of 10 fish this week were, Paul Elsworthy, Carl Williams, Mick Smith, Keith Thomas, Colin Gooch, Graham Holdsworthy, Michael Greene, John Burton, Hughie Wilson, Glyn Evans.  Popular flies this week have been pheasant tail Nymphs, blue flash damsel,  grey duster, chamois, bloodworm, bibio, small blackbuzzers, minkies. We are open every day at 7.30 am 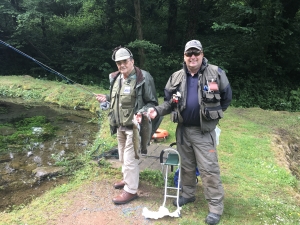 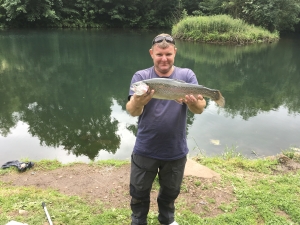