A lot of very fine weather this last week, while typically early autumn chilly mornings and evenings the bright sun during the course of the day tended to make fishing harder, though as the week progressed trout were very much more inclined to respond to offerings. As always, those that can catch trout did aplenty, but patience and perseverance often wins the day and nearly everyone who fished managed to catch with only a couple of blanks. Even with the introduction of a bunch of hooligan Tiger trout from Torre farm last week the competition for proffered anglers’ flies seemed below what might be anticipated. However, there were still plenty of trout taken with several C&R 10 bag limits achieved to the usual culprits (that is, expert anglers), including John Burton. On Sunday Shane Palmer, who hadn’t visited Bigwell for some time, concentrated on his favourite form of fly fishing using the dry and with mostly a klinkhammer type fly landed his 10 C&R bag in about 3 hours.

On Friday last week Les Hendrie on a visit from Scotland was startled when he hooked into a rainbow estimated at 6-7lbs which stripped line and backing in its determined bid for freedom, a colleague, it is reported, in true Jaws tradition, was heard to say ‘…you’re gonna need a bigger net…’. The following anglers all had 1 to 4 fish; Tim von Pokorney, Mark Potts, Richard Hallam, Richard Hallaran, James Bladen, Robin Vale, Nigel Thomas, Stuart McDonald, Paul & Sharon Kontamsen Paul Callan, Colin Gibbons.

On Monday Rob Britten was in first thing for a couple of hours fishing before going off to make a hospital visit having caught and killed 3 nice rainbows. Long-time regular Brian Sissons also came on Monday. Brian suffers ill health but still manages his fishing from his mobility scooter. Well done Brian. His aim for Monday was to get a Tiger trout followed by a tagged fish to scoop up £200 prize money. Best he managed was 3 nice rainbows, but he was quite content to get those before leaving just after lunch. Paul Rees took 3 nice rainbows for the table while Andy Whitnell also took 1 on C&K and 2 on C&R (combined ticket). The killed trout was destined for the BBQ that evening!  Tuesday saw Nick Foster arrive for his first visit on an opportunistic occasion while accompanying his girlfriend on business. She worked, he played, utilising a combined catch, kill & release ticket so that he could take home a trophy for the table and also continue fishing on catch and release, which he did and thoroughly enjoyed his morning. By contrast Hugo Parks, a remarkable man with a very varied career, though now retired, is very much an angling traditionalist using split cane and greenheart rods. However while getting a few tugs he was unable to hook up and later took solace in a bacon sandwich before leaving for an afternoon appointment.

Water quality is good and receipt of well water is sufficient to keep the water temperature down and flush through the pools. Gin pool is particularly clear at the moment. Middle lodge pool has been allowed to (surface) weed up somewhat in order to prevent proliferation of blanket weed and that is being effective. The pool is still very much fishable. The lower lodge pool has been the most productive one this past week and emergers have meant trout have been taking at the surface with anglers so inclined having good sport using the dry. No sign as yet of Daddies / Crane flies. Successful flies have been:  Klinkhammers, black & peacock dry, Damsel fly, pheasant tail nymph, chamois worm fly, black gnat, egg fly. 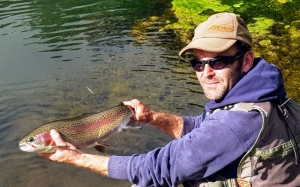